A limited edition replica of Paul Reed Smith’s 1976 “Frampton Guitar”created through a collaboration of Moore Guitars and PRS.

Since building his first guitar in 1972, Paul Reed Smith has always had his sights set on perfection. I think I can safely say that in the world of production guitars, PRS sets itself apart in approaching perfection in aesthetics, playability and sound. However, in pursuit of that perfection, incredible guitars created along the way can sometimes be forgotten. A great example of this is Paul’s 1976 “Frampton Guitar”, the second guitar ever built at his West Street workshop. 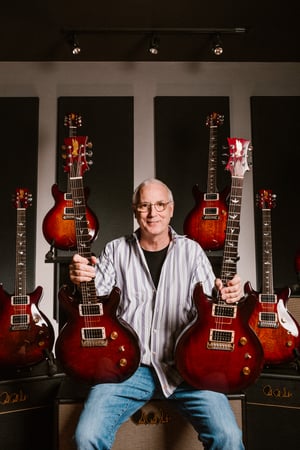 This guitar was Paul’s first commissioned build, and the guitarist ordering it was none other than Peter Frampton. Paul stated that this was the first of his builds that he felt played and sounded better than the 1953 Les Paul he used as comparison to his early attempts. Before delivering the guitar to Frampton, Paul managed to get backstage at a Return to Forever concert to show it to Al DiMeola, who immediately ordered a guitar of his own.

The Frampton Guitar was, in many ways, the true beginning of the PRS story, not only because it was the first of his guitars to feature the iconic bird inlays, but also because of the innovations it included. The 24 fret neck was carved so the “true neck” went from the nut to the last fret without the transitions from neck to headstock and neck to heel interfering with the playing area. The Leo Quan Badass bridge was recessed into the top to allow the strings to be closer to the body for more comfortable playing, and was also modified into a string-through-body configuration with the addition of a brass plate in the back of the guitar. Combined with Paul’s hand-wound pickups, the sound and feel of this guitar made believers out of the top guitarists of the 70’s.

Brett Mulzer, owner of Moore Guitars in Evansville, IN, recognized the importance of the Frampton guitar and 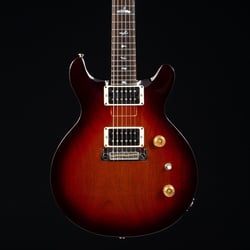 wanted to ensure that this historic instrument would not be forgotten. Brett approached Paul Reed Smith in early 2017 with the idea of recreating this guitar in a limited Private Stock run. Paul was honored by the request, but had initial reservations about releasing a guitar that he felt had been improved upon in so many ways over the years. Mulzer was able to convince Smith that the guitar’s impact on the music world made it worthy of such an effort, and the two immediately began collaborating on the details of the build. In order to be as precise as possible in recreating this instrument, the first order of business was to locate six ‘76 vintage Leo Quan Badass wraparound bridges in pristine condition. Not an easy task. Between Brett and the Private Stock team, they were able to find them, but to meet Paul’s quality standards, all had to have the saddles re-machined. 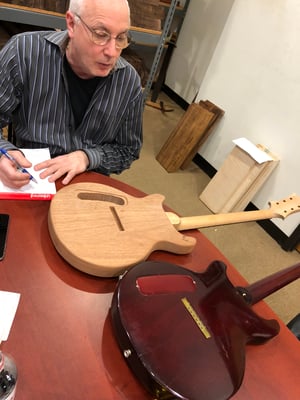 The hand-carved neck of the original Frampton was precisely measured in every dimension from nut to heel to ensure an exact duplication. Having played the original myself and thinking it may have been the most comfortable carve I ever held, I can say the First Birds make me think the same thing. They nailed the neck carve. The headstock duplicates the original Eagle that Paul drew by hand from a pattern copied from a t-shirt. The original inlay was made from mother-of-pearl piano keys that Paul had collected, and the headstock inlay was so large, it took two piano keys to make. The First Birds even get that 2-piece inlay detail correct. Original Schaller tuners finish off the top end.
The neck features Paul’s first attempt at the famous bird inlays, most of them copied from one of his mother’s bird-watching manuals. The original inlay templates created by Paul in 1976 were used for these guitars. A close look reveals that a few of these birds are different from the inlays used today. A Brazilian Rosewood fretboard sporting medium gauge fret wire is beautifully bound in Rosewood as well. A nice detail that could easily go overlooked. 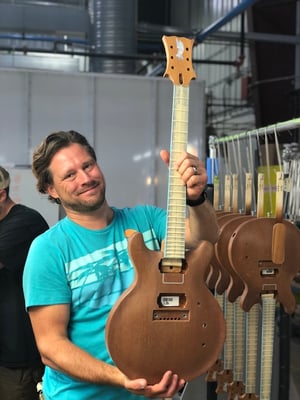 The neck and body woods are South American Mahogany, with a deep neck joint that extends beyond the neck pickup. Paul wanted extra stability for this neck that joins the body at the 23rd fret. A small block of Mahogany adorned with mother-of-pearl purfling covers the joint on the front of the guitar.
The body of this guitar was also Paul’s first venture into the violin carve that his core models feature today, but without the bevel on the lower cutaway found on his later guitars. The back cavity plate, as well as the truss rod cover, are carved wood – just as in the original. It’s beautifully finished in a high-gloss nitrocellulose Mahogany Sunburst.
Specially-made Custom LT pickups in the bridge and neck positions were reverse-engineered from the hand-wound pickups Paul created for the original guitar. The volume and tone pots, wiring scheme and 3-way toggle are all spec’ed to the original design.
As far as building a historic reproduction, I doubt anyone could do a better job. But this guitar is much more than a museum piece. Yes, I know there are only six of these in existence, but it would be a crime if these guitars aren’t actually played. They are truly something special.
The mahogany neck/body in combination with the Custom LT pickups delivers a sound that I can only describe as
iconic. You can hear the wood in each note. Think of classic mahogany instruments of the past, like Leslie West’s LP Junior, Hendrix’ Flying V, Zappa’s SG. That’s the territory we’re in here.
Now, if you’re familiar with Paul Reed Smith’s philosophy about minimizing the “subtractive” qualities of guitar components, it’s quite possible he saw this as something to eventually be overcome. If you can “hear” the wood, or any component of the guitar, it’s subtracting something from the sound. Being a player who gravitates oward instruments with “personality” rather than “perfection,” I have to say this guitar excites me much more than a typical production Core model, because of its unique personality. Don’t get me wrong, PRS Core guitars are among the finest in the world, but the sound of the First Birds makes me go, “Whoa! What IS that?”
The only disappointment to be found concerning this guitar is that there are only six of them. Everyone deserves to hear this piece of musical history.